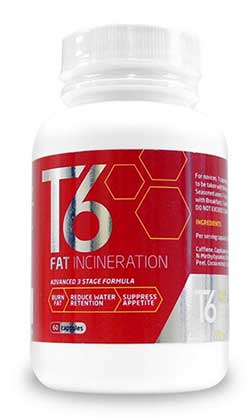 T6 – Fat Incineration is a diet pill produced by Weight Management Systems. The company does not appear to have an official web presence, so the only information about the product comes courtesy of the online retailers who are marketing the pills.

It claims to be the best fat burner on the market and could appeal to those looking to burn excess body fat, reduce their appetite and reduce water retention.

Available to buy from 3rd party stockists, such as bodybuilding online stores, there doe not appear to be a direct option. There are also some retail outlets that stock, it is very much targeted towards UK customers.

The claims made for the capsules are not always consistent, but promised benefits often include: 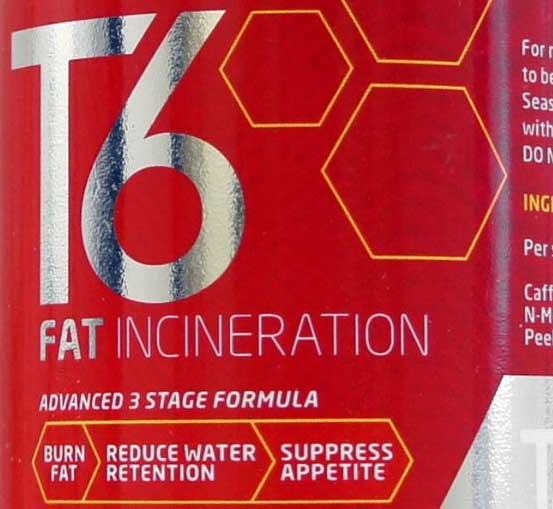 What is T6 – Fat Incineration and how does it Work?

Stage 1: Burn Fat In the case of T6 – Fat Incineration, fat burning occurs via the process of thermogenesis. This is a biological mechanism by which the body is encouraged to heat up and create an internal condition that makes it easier to burn body fat, while also ensuring calories are burned for energy more quickly and efficiently than normal.

Stage 2: Reduce Water Retention Reducing water retention can lead to weight loss, but any weight that is lost will be water, not fat, and the body will return to its normal state very quickly once the influence of the pills have been removed.

However, diuretics can be useful for helping to shrink the tissues that surround the muscles and can be beneficial for bodybuilders who are trying to develop a lean, toned look in readiness for upcoming competitions, or anybody needing to look their best for an occasion.

NOTE: Be careful with the concept of ‘drying yourself out’, as it is never favourable to be dehydrated.

Stage 3: Suppress Appetite – Appetite suppressants are designed to enable the user to eat less food. It then becomes a matter of simple maths. Less Food = Less Calories and Less Calories = Less Likelihood of Further Weight Gain. Better still, if the amount of calories consumed each day is in deficit then the body is more likely to burn more fat reserves.

NOTE: Appetite suppression and calorie control is one thing, but if you start starving yourself, your body will look to richer sources of energy to burn, and will start digging into your protein – i.e. muscle – and you don’t want that. Go slow and steady and you will lose a greater portion of fat in the long run.

How to Take T6 – Fat Incineration “Novices” are advised to take one capsule per day, before eating breakfast. “Advanced Users” can take a second capsule, before lunch, but the maximum dose of two capsules per day should never be exceeded.

Customer feedback suggests the capsules have worked well for some users and not at all for others.

“I have been losing around a pound every two days right from the word go and I have only been taking one capsule a d day. I tried two, but they were too strong for me. If you can handle two capsules a day, you may do better than me, but I am losing weight so no complaints here.”
“Didn’t do a damn thing. I might as well have been popping smarties.”
“The best diet pills I have ever tried. They give you plenty of extra energy and help you cut down on your portions. I have lost 10 kilos in 3 months. Highly recommended.”
“I took the capsules in the manner described on the bottle, but they did not help me to lose weight. They provided a little extra energy, but they are marketed as a fat burner and that is what I required. If I could ask for my money back I would do so.”

Reported side effects include:

‘Feeling strange’ and ‘racing heart’ most likely affects the so-called novices of the fat burning game. People who take the maximum recommended dose without having been used to caffeine or other stimulants are usually the people who complain of side effects. They are also asking for trouble in our opinion.

If you are not used to caffeine and all the other stuff in T6 then take it easy. Try one pill per day for a couple of days and see how you go after that.

T6 – Fat Incineration is sold without a money back guarantee.

T6 – Fat Incineration is available from many UK-based online stores, from Amazon, and via some eBay sellers. The price can vary one supplier to the next and generally ranges from £20 to £26 per (60 capsule) bottle.

Bottom Line – Is It Recommended?

We quite liked T6 Fat Incineration, it has some good ingredients, but it won’t make the shortlist of our recommended fat burners.

The dosages of green tea and L-Carnitine are a little low for us and perhaps the rest of the blend feels a little unbalanced also. 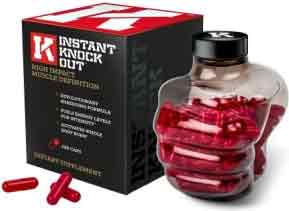 Instant Knockout is a strong fat burner that has been produced from actual supplement users and sold to professional athletes. It’s standing cannot be overestimated.

It is suitable for everyone – whether you simply want to lose stubborn belly fat or you are needing some muscle definition.

It is competitively priced, ships to all countries and comes with a 90 day money back guarantee. If there was such a thing as a required purchase then this is it!

Share
Previous Clenbutrol Fat Burner Review – Should You Go For It?
Next HydroxyCut Hardcore Next Gen – Review and Rating with Customer Comment

Shred JYM is the fat burner supplement from the highly respected Dr. Jim Stoppani, who …

T6 - Fat Incineration does contain some good ingredients, if a little weak in inclusion rate. It does not make our list of recommended fat burners.